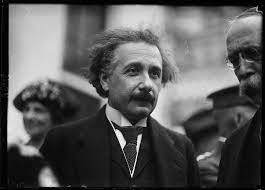 That is inherent in the other famous definition of love, "Greater love has no man than this - that a man lay down his life for his friends." [John 15:13] That obviously means that you lay down your life so your friends can have theirs.

So really, true love means giving all your abilities and your talents to the welfare of yourself, to your neighbor or your friend, or to your husband or your wife rather than to yourself. That obviously poses a question, "Who then takes care of you?"

If you spend your time wanting your colleague at work to be promoted instead of yourself, then who takes care of your promotion? Of course, we suggest that two of the greatest intellects - well, two of the greatest intellects of our era -- give a very plain answer to that question. The one is Einstein. He answers this way, "My religion consists of a humble admiration of the illimitable superior Spirit who reveals himself in the slight details we are able to perceive with our frail and feeble minds. That deeply emotional conviction of the presence of a superior reasoning Power which is revealed in the incomprehensible universe forms my idea of God."

Darwin was in no doubt himself, that evolution did not at all explain the origin of the world. Evolution simply explains the way the world MAY have developed after it was created. But he was in no doubt that the order and design that is inherent in the world could only have evolved if it had been programmed into the world by a mind at least as intelligent as ours - and with as much personal will as ours.

And so, both Einstein and Darwin, two of the greatest intellects of our generation are very convinced that the only explanation of the universe with its order and design is that there is a God who has made it. In fact, you have to force yourself into an emotional kind of illogicality - such as many of us have tried to force ourselves into in our generation in order to believe that there is no God.

It is very difficult to look at the world as Einstein and Darwin looked at it. That is, to look at it with an analytical mind, examining and seeing the order and design that there is in it and come up with the conclusion that it had all happened by chance.

Einstein had no doubt that there had to be a personal mind to plan the design that there is in the world of nature with its beautifully symmetrically designed flowers; with the balance that there is in nature with the amazing way that certain insects keep down other insects so that we are not overwhelmed by disease; with the incredible way that crops come up at the right time every year; with the unusual way in which animals sense when cold is beginning to disappear and when it's beginning to get warm.

There is no way, if you look at the world through an analytical mind, there is no way in which you can conclude that it all came about by chance. Darwin knew that even if you tie it all back to a single-cell amoeba, someone somewhere had to create that single-cell amoeba. Someone had to create it. Even if you hypothesize that the atoms were just falling down through space and then two of them crash together and then others built up like a snowball you have to explain where the atoms came from in the first place and who started to rain them down like rain and through space.

It's the same with all the theories about the "Big Bang". If there was a big bang and an explosion, first of all, we have not seen explosions create much order and design in our universe. They always seem to create destruction. But even if it is explained by a Big Bang Theory, then what made the big bang? If the whole universe started from an explosion, then what exploded? Who created what exploded?

There is a mindless kind of futility about the present attitude that we take to evolution, regarding it as if it were an explanation of the origin of the universe. It isn't. At best, evolution is in Darwin's mind and in those who think freely outside the limits of the little party lines that we've all taught each other. If you think outside those lines, everybody realizes that evolution explains the way the original single-cell amoeba or the original creation might have developed. But of course, it does not explain how it originated.

Evolution is simply a hypothesis of the way things might have developed the way they are today. But the origin of the thing that developed, can only be attributed to some mind or some personal will. Certainly, that's the conclusion of Einstein and Darwin. We should be very sure of ourselves before we part company -- not only with the greatest intellects of our time -- but in fact, with men and women down through the centuries, from the most primitive tribesmen in the jungles of Africa to the most sophisticated intellect that lived here in America. The conclusion is the same. They have constantly a belief and an innate assumption that there is a God that they kind of worship in all their lives -- and that you find that in every tribe that ever lived in the world.

There is every reason for beginning to suspect that there is a God. Of course, if you examine the world itself the evidence is very powerful. It is very persuasive. Water has a high specific heat. This means that chemical reactions within the human body will be kept rather stable. If water had a low specific heat we would boil over with the least activity. If we raised the temperature of a solution by 10 degrees centigrade, we speed up the reaction by two. Without this particular property of water, life would hardly be possible.

The ocean is the world's thermostat. It takes a large loss of heat for water to pass from liquid to ice and for water to become steam. Quite an intake of energy is required. Hence, the ocean is a cushion against the heat of the sun and the freezing blast of the winter. If the temperature of the earth's surface weren’t modulated by the ocean and kept within certain limits, life would either be cooked to death or frozen to death. It's not chance that water is the basic element in our world. It's part of the order and design that we see in our universe. It is part of the evidence that this must have come from a designing Intellect.

Listen to How to Love-No. 12-Is There a Creator that will Take Care of Me?