The structure of the DNA molecule reveals such beauty 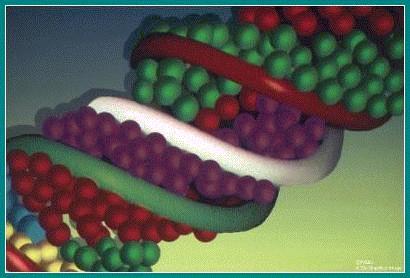 The mystery of organic reproduction is one of the greatest discoveries of science. Pieces of the puzzle were uncovered by the monk Gregor Mendel in 1865 who noticed characteristic patterns in crops of peas grown for the monastery garden. The shape of pea pods seemed to have noticeable similarities to the plant the seeds came from. His discoveries on inheritance led the way for a century of genetic research culminating with the discovery by Watson & Crick of the structure which enables self duplication.
The next great advances in genetic science had to wait until technology was available to probe the microscopic secrets when electron microscopes opened up the coiled DNA structure and could catch the

replication process in action. What they found is a complex spiraled chain of two strands. Each link in a strand connects to a complimentary partner link on the other strand. (See illustration.)

If one were to separate the strands, each strand would contain all the information of the other separated strand. Because of this mechanism, cells are able to divide quickly without the loss of the vital genetic blueprint.
The amount of information held in the DNA molecules of human genes is so vast that a global scientific effort was undertaken. The complete mapping of the human genetic blueprint was accomplished in the year 2003. The scientists have identified the 30,000 genes in human DNA and the also determined the sequence ( or order ) of the 3 billion chemical base pairs that make up DNA. From that stepping stone, medical science begins the investigation of illness and aging at the most fundamental level.The DNA molecule is both beautiful to behold and elegantly simple in its function.